How Can A Foreign Model Suit the Culture of Aotearoa?

"Haehaetu responded with authority and expertise when there were challenging questions raised about whether an international model could work in an Aotearoa context for a predominantly Māori population in the homeless space," remarked Lisa Roberts, Housing First Programme Leader, who attended the panel discussion. "Haehaetu explained how she had been dubious and cautious initially, but we took the model, overlayed and embedded Māori cultural principles and introduced the voice of lived experience at the heart of all decisions, and it transformed into a New Zealand specific programme." 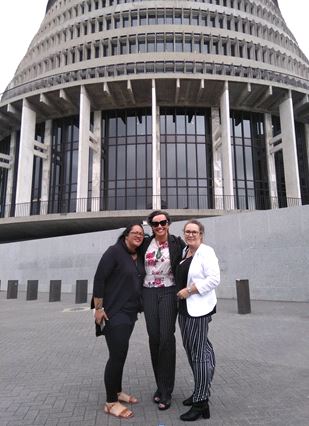 Lisa strongly believes that there is no demarcation between addictions, homelessness, mental health, physical health, trauma, head injury, and learning disability. "The people we serve have multiple complex needs," she said. "We need both staff and systems who have the flexibility of expertise to deal with them."

Unfortunately, the traditional system only offers a siloed response, lacking in creative solutions. Lisa observed that the people at this year's heavily-attended Addiction Leadership Day were thinking about how addictions services can provide a better respond.

"Dr Fraser Todd, for example, shone the light on the need for a whole systems-change thinking, one that we are already involved in in Auckland, so that felt promising," said Lisa. "Peter Glensor spoke passionately regarding how to work with people at the centre, working with their heart, restoring mana, using respect and understanding."

The quote of the day was no doubt the simple but inspiring words of Haehaetu, who declared, “Sometimes you just have to do it!” This was met with applause, because the audience was well aware that despite rules and boundaries and processes and policies sometimes the right thing to do is just to do the thing that needs doing.

See how our human-rights based Housing First approach has supported people out of homelessness.