On the 28th February the Maniapoto Whānau Ora Centre opened. A massive achievement for Taumarunui Community Kokiri Trust.  This building has enhanced our services I believe from a strictly Maori worldview.  Whānau Ora begins with whakapapa as does everything else. Our environment, the physical and the non physical, our stories and histories depict who, why, where, when and why we are Maori.

The outside of the building depicts who we are as an Iwi the “Maniapoto Whānau Ora”- Maniapoto Family Health Centre, beautifully adorned in kowhaiwhai. Our services are publicly advertised on our windows - the eyes of our building.

The inside is adorned with our whakairo tipua pertaining to our waka Tainui, to which I liken the building. At its stern is Hoturoa, the captain of the waka who is strategically placed in the foyer, and we are its navigators.

Nothing pleases me more as first navigator, to greeting, directing and offering information to our clients, both internal and external the correct pathway to take in their seeking further sup-port and assistance from our respective navigators. 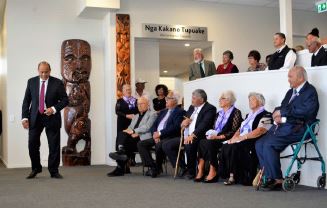 Motakiora is the clinic, appropriately named. Being the site of our historical battle it stands today as waahi tapu – loosely translated as a sacred area that we as an Iwi remember the atrocities where our matua tipuna Rora – son of Maniapoto was bludgeoned to death.

We have bought this name inside our whare to remember that incident and to direct our peo-ple to seek well health through our Clinical navigators, of whom are multi cultures all working together to achieve the same objective – clinical well health and education for all.

The Mental Health section of the centre is called Mangaokewa. Named after the river that me-anders through Te Kuiti the Mangaokewa awa springs from within the Rereahu rohe. ‘Manga’ being a traditional word for river and ‘kewa’ a particular rock found in the river – black in col-our – was favoured by Tamaaio, father of Rangiaanewa, first wife of Rereahu and mother of Te Ihinga-a-rangi. Tamaaio used the rock in the preparation of tapa cloth, hence one of his kainga was named Taporaroa (Tapararoa) because of this. I liken this section of the building Mental Health area, to that of the tapa cloth. The walls are adorned with whaariki - woven mats. The Mental Health navigators prepare and support our people on the road to wellbeing where they aspire to be.

Nga Kakano Tupuake – nurturing our tamariki is appropriately the centre’s Family Start unit. The mokopuna/tamariki are our pillars of tomorrow. We encourage, awhi and provide free ad-vice during and following pregnancy, health and breastfeeding support to name a few. Overall the Kakano navigators are totally committed to strengthening the well being of whānau and linking them to the right pathways offered the community as a whole. 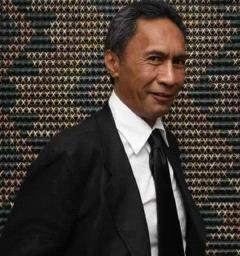 In recognition of his contribution to Taumarunui Community Kokiri Trust over many, many years and in honour of his memory, the Board Room within the Maniapoto Whanau Ora Centre has been dedicated to Richard Batley who sadly passed away on 8th November 2018.

Hoturoa was born in Hawakinui, he was the son of Auaukiterangi and Kuotope. Hoturoa was the captain of the Tainui waka, navigating the waka from Hawaikinui to Aotearoa using the stars and winds. Not only was Hoturoa the captain of the Tainui wa-ka, he was also one of the men that felled the tree and built the waka. It was Hoturo-as karakia to tane that al-lowed the waka to leave land and be launched to sea. They set sail from Hawaikinui and first landed at Whangaparoa, approximately 800 years ago.