During the month of February three staff members of HealthShare travelled to Kanpur, India to attend the Marwari wedding of the previous PRIMHD Decision Support Coordinator for the Midland Mental Health & Addiction team, Pragya (Ashley) Bajaj and Andrew Holmes of Auckland.

A Marwari wedding is celebrated with a lot of enthusiasm, exuberance and is very grand and colourful.  Included in the celebrations were pre-wedding rituals which began on the 17th February to the wedding ceremony on the 19th where all the wedding party both Indian and non Indian participated.  The Mehendi or Henna ritual was an exciting experience on day one where the women had their hands filled with designs which are signs of happiness, abundance and fulfilment accompanied with a lot of food, drink and dancing.

Bhaat Bharna / Nyotana ceremony was held on day two where the maternal uncle and his family offer gifts to his sister and niece followed by traditional chanting, food and drink.  That evening we were gobsmacked by the Jai Maal event and venue which was fit for a King and Queen, the ambience and atmosphere was that of magic.  Here we witnessed the ritual where bride and groom exchanged garlands which symbolizes acceptance of each other, followed by non stop food, drink and dancing. 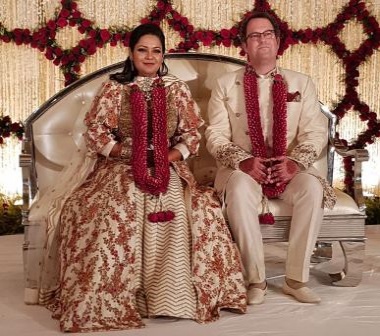 The wedding day rituals began at 8am with the Telbaan which entailed a paste of turmeric, fresh milk, yoghurt, olive and mustard oil applied to the face, hands and feet of the bride and groom.  This ritual is meant to cleanse body & soul and symbolises a new start leaving behind the past.  The wedding ceremony began with the arrival of the groom on a white horse with his entourage, a brass band and dancing.  On arrival to the gate the groom is welcomed by the father of the bride and is given a neem stick to touch the Toran, this is done to ward off any evil presence around him.  During the wedding ceremony nine rituals occurred where the sixth ritual included seven vows, post the wedding an additional four rituals were upheld including the Sangeet which is a fun ceremony full of food, music and dancing.

Overall being part of Pragya (Ashley) and Andrew’s Marwari wedding was an honour and a privilege – Our biggest thanks goes to Mr and Mrs Bajaj for their generosity, care and kindness, thank you for including us as part of your family.

The Midland Mental Health & Addiction team wish Pragya and Andrew all the best for their marriage and safe return back to New Zealand where they will make their home in Auckland.

Click here to return to End of Summer Newsletter