A pregnancy and parenting pilot, working to break intergenerational harm from addiction, is really starting to make a difference in Tairāwhiti. It is one of 3 pilots around the country working with pregnant women and parents of children under three, who are experiencing problems with alcohol and drugs, and are poorly connected to health and social services. 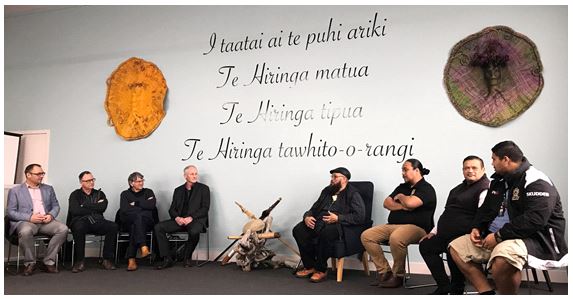 Te Hiringa Matua is a kaupapa Māori service. The five men and five women in the Te Hiringa Matua team are known as mataora and have a range of skills and talents in the creative and performing arts as well as clinical skills.

Te Hiringa Matua has worked with 153 whānau in the last 16 months. There have been very few formal referrals. Most people have contacted the service directly or through the extensive networks that the Mataora have developed.  This is quite different from the other pilots.

Last week the Midland DHB Chairs and Chief Executives had their monthly meeting in Tairāwhiti which included a welcome into the Te Hiringa Matua whānau. They also met with Tairāwhiti iwi health providers Ngāti Porou Hauora (lead), Tūranga Health and Hauiti Hauora who are partners in the programme.

How does it work?
Each Mataora has a caseload so they can provide all the support whānau may need. Support is wrapped around weekly wānanga (seminar) grounded in Te Ao Māori mātauranga (knowledge/understanding) and pūrākau (stories). Whānau - rather than individuals - are welcomed through the ōkawa (formal) process which also acts as a triage procedure. Through wānanga, whānau have the opportunity to strengthen their identities to belong to a meaningful group and the wider Māori world. They can also engage with positive role models for whānau ora and parenting.