In 1990 the deinstitutionalisation process began and the establishment of community mental health services and Kaupapa Maori and Maori Mental Health Services in mainstream services begun.

In 1997, Lakes DHB Maori Health gained funding from the Midland Health Funding Authority to Hui with Maori Mental Health providers in the Midland Region.  The purpose of the Hui was to consider the “Key Worker” roles and gain feedback from Maori on how they understood this role could work.  At this time, mental health service’s consisted of large institutions eg. Tokanui providing mental health services to the Midland regions.  At this Hui, held at Tapuaeharuru marae, Rotoiti, Miria te Hinengaro (Kia Tupu He Whakaaro) was formed.  Miria te Hinengaro was the first collective of Maori Mental Health providers, consumers, whanau in the Midland region.

From 1997 through to 2002, Miria te Hinengaro (with the support of Lakes DHB Maori Health), led development on Maori models of practice, and held wananga on Pohiri Poutama in Taranaki, Tairawhiti, Lakes, Waikato, and Bay of Plenty.

In 2000 the Ministry of Health began developments on establishing Regional Mental Health and Addiction Networks. In 2002, at a Hui in Ruatoki the name “Nga Purei Whakataa Ruamano” (the cluster of stars) was given by the Kaumatua of Tuhoe. 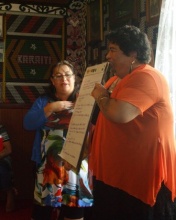 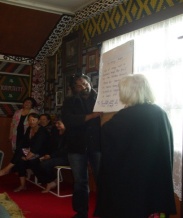 The day began with karakia by Pou Herenga of Lakes DHB, Eru George followed by a Discussion Panel made up of Marita Ranclaud - Planner & Funder Lakes DHB, Janice Beazley - Werry Centre and Maureen Emery - Service Manager Lakes DHB to give three different perspectives on the following question: “What do you see will be the future directions for Maori mental health and addictions given the indications of the Blueprint?”

The Nga Purei Whakataa Ruamano members identified the "Keynote Speakers" for this conference, they were: